Savouring the Moment by Moira Brown 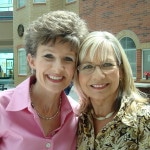 “Moira, you don’t SAVOUR!” My deflated friend finally offered up the reason for her evident disappointment as we stood in the supermarket checkout line. Single at the time, I had quickly seized the one item on my shopping list, not realizing this was meant to be a leisurely, relational experience! I’m sure that the “Author of Life” is often grieved because of what we miss in our attention-deficit society.

“There is a fast-growing crusade to put the brakes on modern life,” according to Maclean’s August 1st, 2005 cover story, THE JOY OF SLOW. Sometimes life puts the brakes on for us. Patti Foster spent six weeks in a coma after a horrific traffic accident on June 18th, 2002 in Texas. The 34-year-old was on her way to a Bible study with three other women when their SUV was rear-ended by an 18-wheeler, pulling a trailer of cars at 70 mph. An eyewitness thought “a piece of laundry” had flown out of a window. The impact turned Patti’s body into a missile, her head and body ripping a hole in the back, right-side panel of the vehicle. The radio host and former fine arts missionary (teaching English through music) had damage to every lobe of her brain – along with multiple fractures – and had to fight for her life.

As the restoration process began, she had to relearn basic functions such as how to blink and swallow. “Because of this, words really made very little sense to me,” Patti explains. “However, non-verbal communication did. As people came into my room, I immediately interpreted what they were saying nonverbally. I paid attention to their eye contact, tone of voice, facial expressions, touch, body gestures, etc.” Patti is quick to point out that 97 percent of communication is nonverbal.

Before our recent 100 Huntley Street interview, we held hands as we chatted. Patti radiated Jesus, and I was reminded that God wraps up His best gifts in people. As a result of the traumatic brain injury, this brave survivor has challenges with short-term memory. But you can see that she relishes those “aha” moments – pausing and depositing them in a special place within her brain so they are not lost.

“Moment by moment, I go out of my way to pay attention. The small things are really the big things. Once you’ve died, you learn the real significance of living.” Patti’s mission is M.A.D. Now!  She’s determined to Make A Difference Now! and encourages everyone else to do the same. For a woman who leans into life with zest – despite having a body comparable to that of an 80-year-old – this is not motivation to more activity, but more receptivity. It’s about… savouring. Friends learn to “taste and see that the Lord is good”1 as Patti picks up, points out and prays about things that might be overlooked in the busyness.

Twenty-five years after my supermarket indictment comes this challenge from my new friend: “What does your life say when your mouth is not moving?” Hmmm… I need to savour that!

Hope For The Journey

As any kind of trouble erupts in your life, Hope appears on the scene in all shapes and sizes at just the right time. It has no limits…knows no boundaries. Read More

From death to life, Patti Foster lays hold of each moment and brings hope to others. A horrific traffic crash left Patti dead on the busy highway during evening rush hour. A gurgling noise made all the difference….and the fight to live ensued. Traumatic brain injury and fractured bones all over her body gave way to a coma that lasted 6 weeks… Miracles still happen!